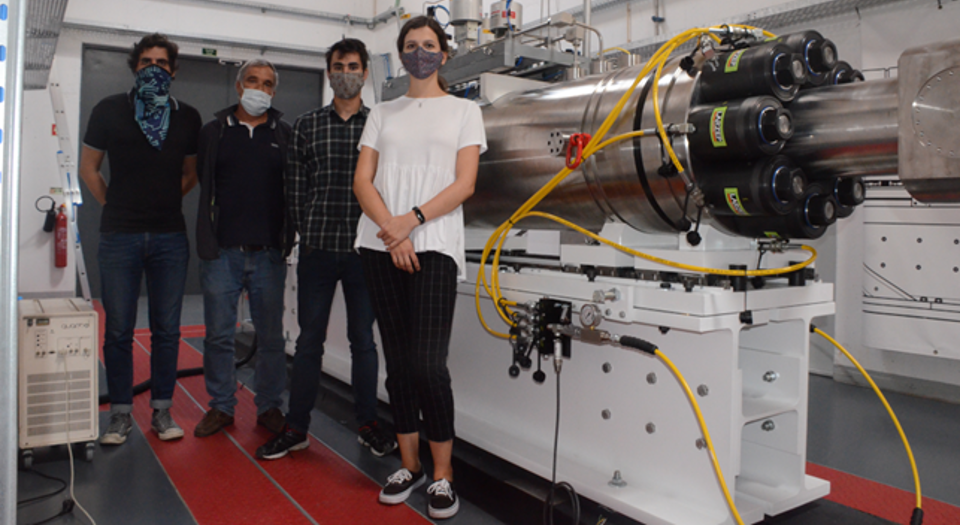 The European Shock-Tube for High Enthalpy Research (ESTHER) is a new-generation shock-tube for the support of planetary entry missions, which is being developed by an European consortium led by the Institute for Plasmas and Nuclear Fusion (IPFN), under funding from a Technology Research Program from the European Space Agency (ESA).

The facility is hosted at the Hypersonic Plasmas Laboratory (HPL), located at IST’s Campus Tecnológico e Nuclear in Loures. Manufacturing and assembly operations were successfully completed in 2019, leading to the inauguration of the facility on the 24th July 2019, 50 years after the fiery return of the Apollo 11 manned capsule, inbound from the Moon.

The design of ESTHER incorporated a significant amount of key technological improvements over the last generation of shock-tubes, which allow achieving world class performances, repeatability, reliability and low turnaround. One of such improvements is the laser-ignited combustion driver, which provides ESTHER with unprecedented capabilities, compared to similar facilities.

Shock-Tube driver technologies are roughly split into piston and combustion drivers, each embodying specific advantages and shortcomings. Piston drivers are generally clean, but suffer from drawbacks such as strong recoil and maximum pressures typically limited to the 200 bar to 300 bar range. Combustion drivers (with no moving parts) are less affected by recoil issues, but they normally present potential pollution issues in the shocked flow because ignition is achieved through hotwire or sparkplug sources. Transition to detonation, which adversely impacts the repeatability between different tests, is also a concern.

Laser ignition fully negates the drawbacks of driver pollution, since the ignition source is outside the driver chamber. However great care needs to be exerted in designing high-resistance laser window ports, and in adopting detonation prevention techniques, namely through careful tailoring of the stoichiometry for the H2/He/O2 mixture. A 3 litre scaled driver demonstrator was manufactured in 2015, and the viability of this technology was demonstrated during several campaign tests in 2015-2017, attaining post-combustion pressures of up to 620 bar, with no detonation and with excellent repeatability.

The final 50 litre combustion driver was successfully commissioned and pressure-tested (with water) at pressures up to 1550 bar, in early 2020. The HPL activity was then suspended for several months, during the Covid-19 quarantine shutdown of the laboratory, to resume last September, with the verification and recommissioning of the different subsystems of the shock-tube. The first shot of the full-scale driver was successfully completed on October 1st 2020, with a low filling-pressure of 10 bar, a clean deflagration and a target post-combustion pressure of 60 bar, as expected.

ESTHER will now continue the qualification test-plan, slowly increasing the combustion pressures of the driver. The physical-chemical dynamics of the high-pressure processes will continue to be monitored, to ensure safe and reliable performance without detonation. After 1-2 months of static test-shots, the facility will be ready for its first dynamic shot, with the generation of shockwaves in excess of 10 km/s.