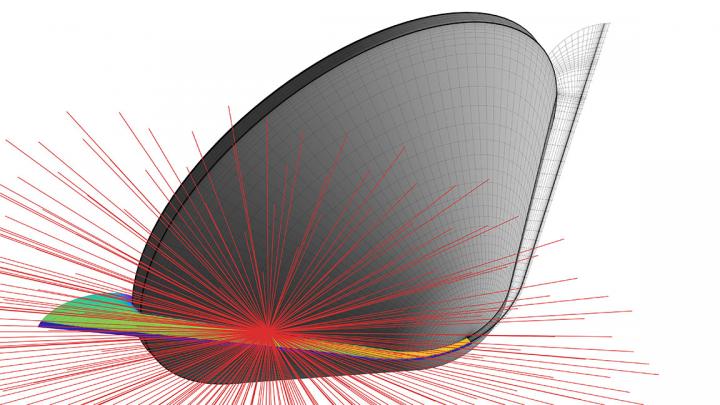 In 1995, Galileo's probe entered Jupiter's gravity travelling at 47.4 kilometres per second, making it one of the fastest man-made objects ever. The fireball caused by the descent from Mach 50 to Mach 1 warmed the carbon phenolic heat shield to temperatures hotter than the Sun's surface.

Data from the probe revealed the rim of the heat shield burned significantly more than fluid dynamics models would predict, measured by what is called the recession rate.

Now, Luis Fernandes and Mário Lino da Silva from N-PRiME/IPFN at IST/Universidade de Lisboa, together with Bruno Lopez from the University of Illinois at Urbana-Champaign employed new computational techniques to explain the discrepancies. The researchers ran updated fluid radiative dynamics models using the data transmitted from the Galileo's 30-second entry.

The simulations recalculated the features of the hydrogen-helium mixture crossed by the probe, such as viscosity, thermal conductivity and mass diffusion, and found the oft-cited Wilke/Blottner/Eucken transport model failed to accurately model interactions between hydrogen and helium molecules. It was found that the radiative heating properties of hydrogen molecules played a significant role in the additional heating experienced by the probe's heat shield.

This work helps to improve future spacecraft design, including upcoming projects to explore Neptune. A more detailed description is available in the article 'Computational fluid radiative dynamics of the Galileo Jupiter entry', authored by the three researchers.