Computerized Tomography (CT) has been one of the greatest achievements in medical imaging, but at the cost of a high, potentially harmful, X-ray irradiation dose. The ultimate goal of VOXEL is to provide an alternative to tomography with a disruptive technology enabling 3D X-ray imaging at very low dose. VOXEL aims at prototyping new cameras working either in the soft or hard X-rays that will combine the X-ray penetration and nanometre spatial resolution, easiness to use, afforded by avoiding the rotation of the source or the sample, and extremely low dose for maximum impact on medicine and biology.

VOXEL relies on the integration of trans-disciplinary fields in medical imaging, optics, X-ray physics, computational and applied mathematics. The VOXEL team members are experts in X-ray metrology, wavefront sensing, atomic physic, mathematical computing and 3D medical imaging. By basing the research lead in Portugal with a woman coordinator, VOXEL will be transformative for scientifically emerging countries.

VOXEL is an international project, with partners from Portugal, Spain, France, Italy, and the Netherlands. You can find a short description of all the VOXEL partners below.

The Association of Instituto Superior Técnico for Research and Development (IST-ID) is a private not-for-profit institution, which primarily aims at carrying out Science and Technology activities, fostering knowledge transfer and promoting the involvement of national and foreign researchers, internally and externally, in RD&I projects in their areas of expertise.

Laboratoire d'Optique Appliquée (LOA) is a public French laboratory under three institutions CNRS, Ecole Nationale Supérieure des Techniques Avancées-ParisTech and Ecole Polytechnique. The LOA is composed of about 100 persons on which half have permanent positions.

The Universidad Politécnica de Madrid (UPM) celebrates its 33 anniversary this year 2014. Despite the recent foundation of this university, most of its centres are over hundred years old and were founded during the 18th and 19th century. They were independent schools until they were grouped to form the UPM. It is no exaggeration to state that over one and a half centuries great part of the history of Spanish technology has been written by the Schools of Architecture and Engineering. 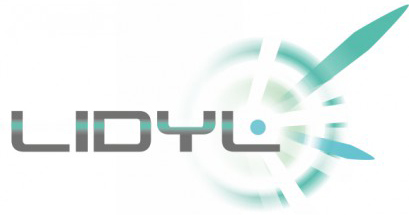 The Rome Unit of the Institute of Chemical and Physical Processes (IPCF) of the Italian National Research Council (CNR) was established in 2010 and forms the IPCF's backbone together with the units located in Messina (IPCF's headquarters), Pisa, Bari and Cosenza. It is based in the Physics Department at Sapienza University, where most of its researchers are housed. Our members carry out experimental and theoretical research in different areas of active matter, soft matter, statistical mechanics and biophysics. The Unit is currently composed of 11 tenured researchers, about twenty research associates from different Italian universities, and three administrative assistants.

Imagine Optic is a French firm employing 26 persons full-time; 16 of the are working on R&D. The annual turnover is of 2.5 M€. 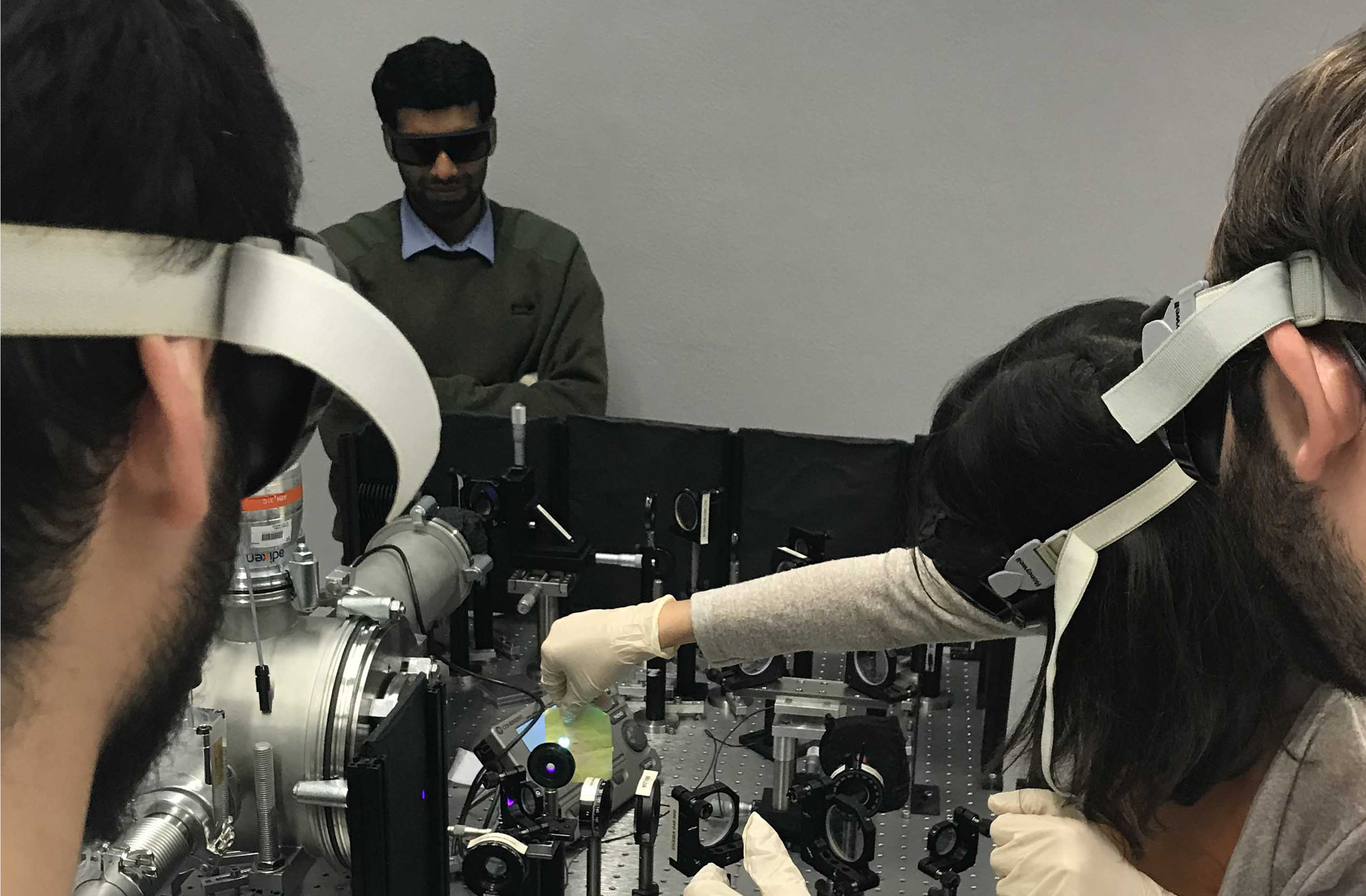 The students of APPLaUSE (a PhD program hosted by Instituto de Plasmas e Fusão Nuclear at Instituto Superior Técnico) had the opportunity to visit the VOXEL metrology station and learn how to double the frequency of a high power laser to increase the efficiency of x-ray generation. APPLAuSE students are enrolled on a course on high energy density plasma diagnostics had a practical session at the VOXEL metrology station, where X-ray detectors were shown. The students had some hands on opportunity with the high power laser, competing in small teams for the maximum frequency doubling conversion efficiency. 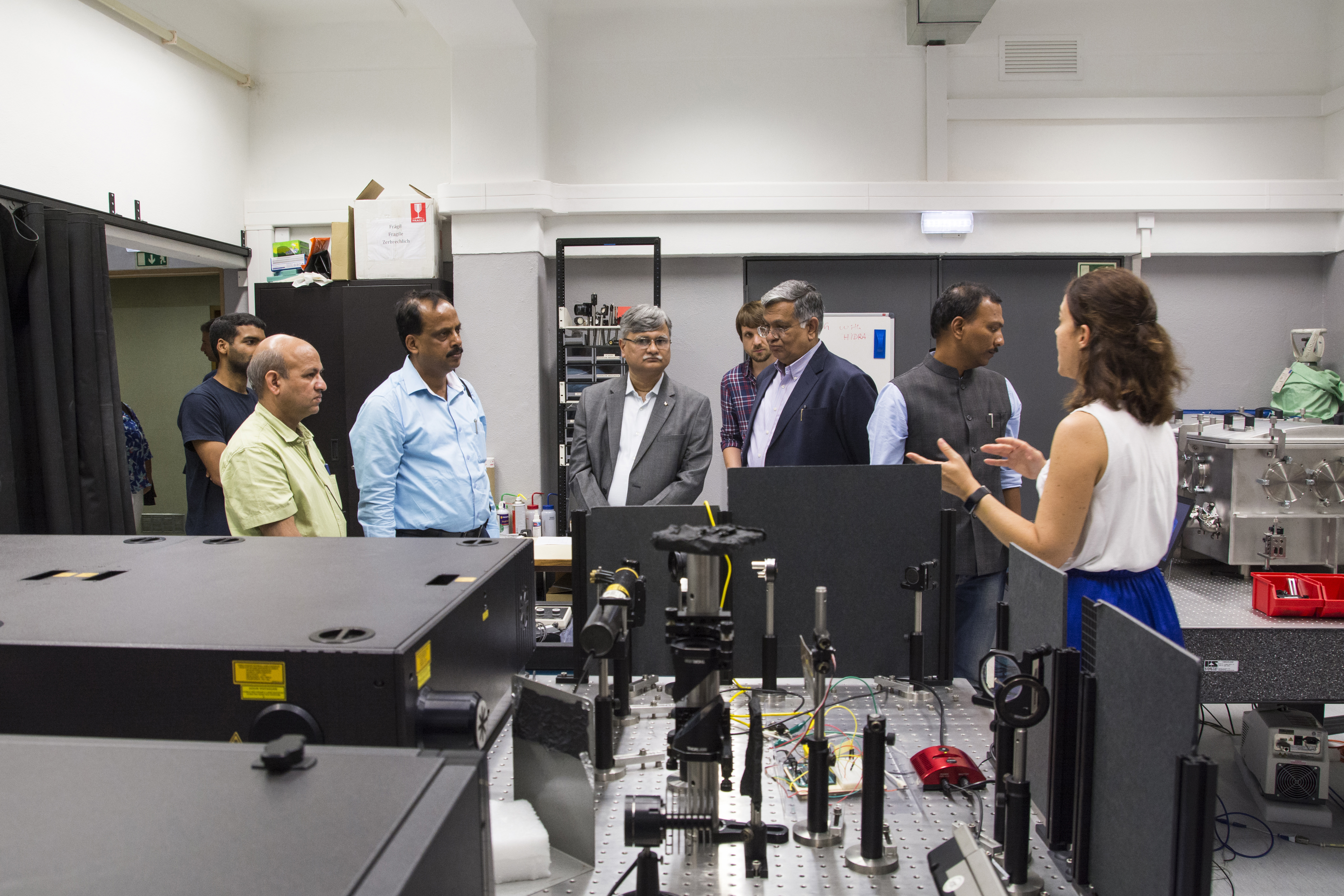 On 23rd June 2017, the VOXEL station received an entourage of Presidents, Deans and Professor from the Indian Institutes of Technology of Gandhinagar, Madras and Roorkee, the aim of this visit is to establish a formal cooperation between these Institutes and Instituto Superior Técnico. 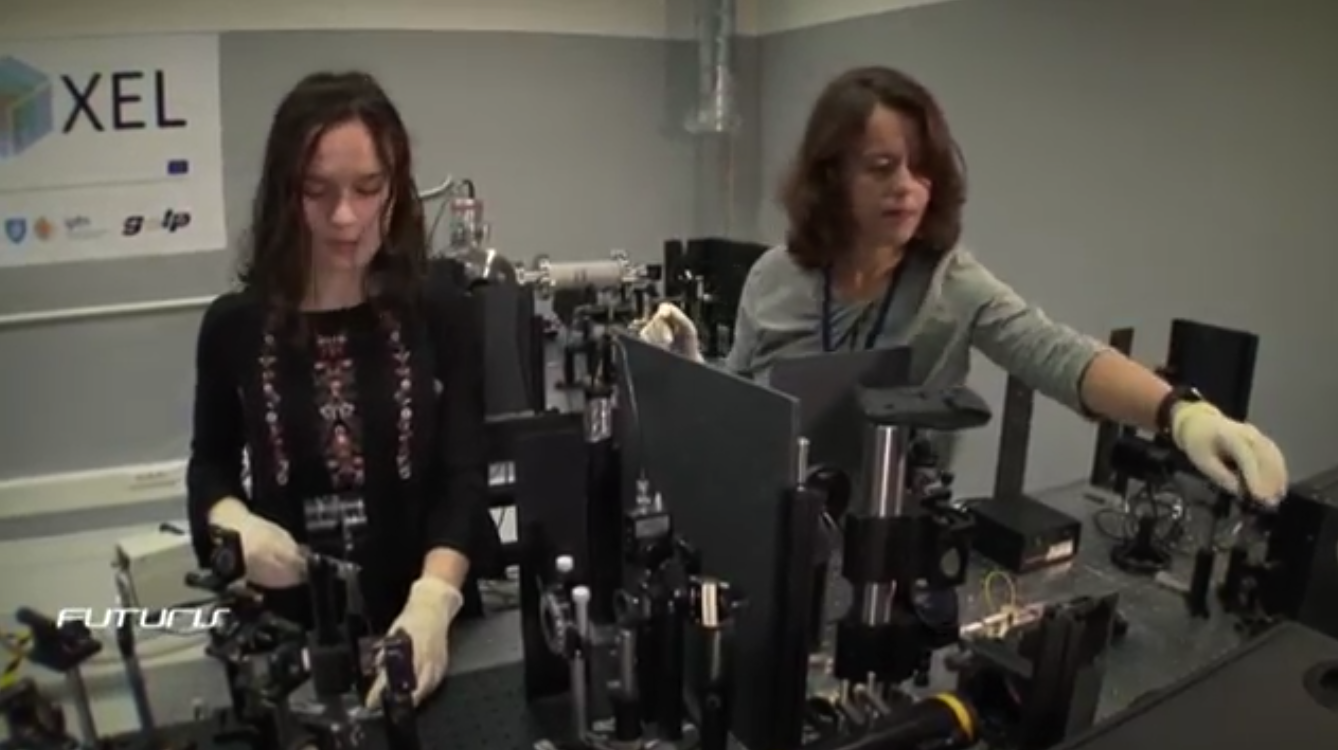 The VOXEL project has been recently featured on Futuris, a program by euronews that covers the latest news about the leading scientific and technological research projects in Europe. The video is available here. 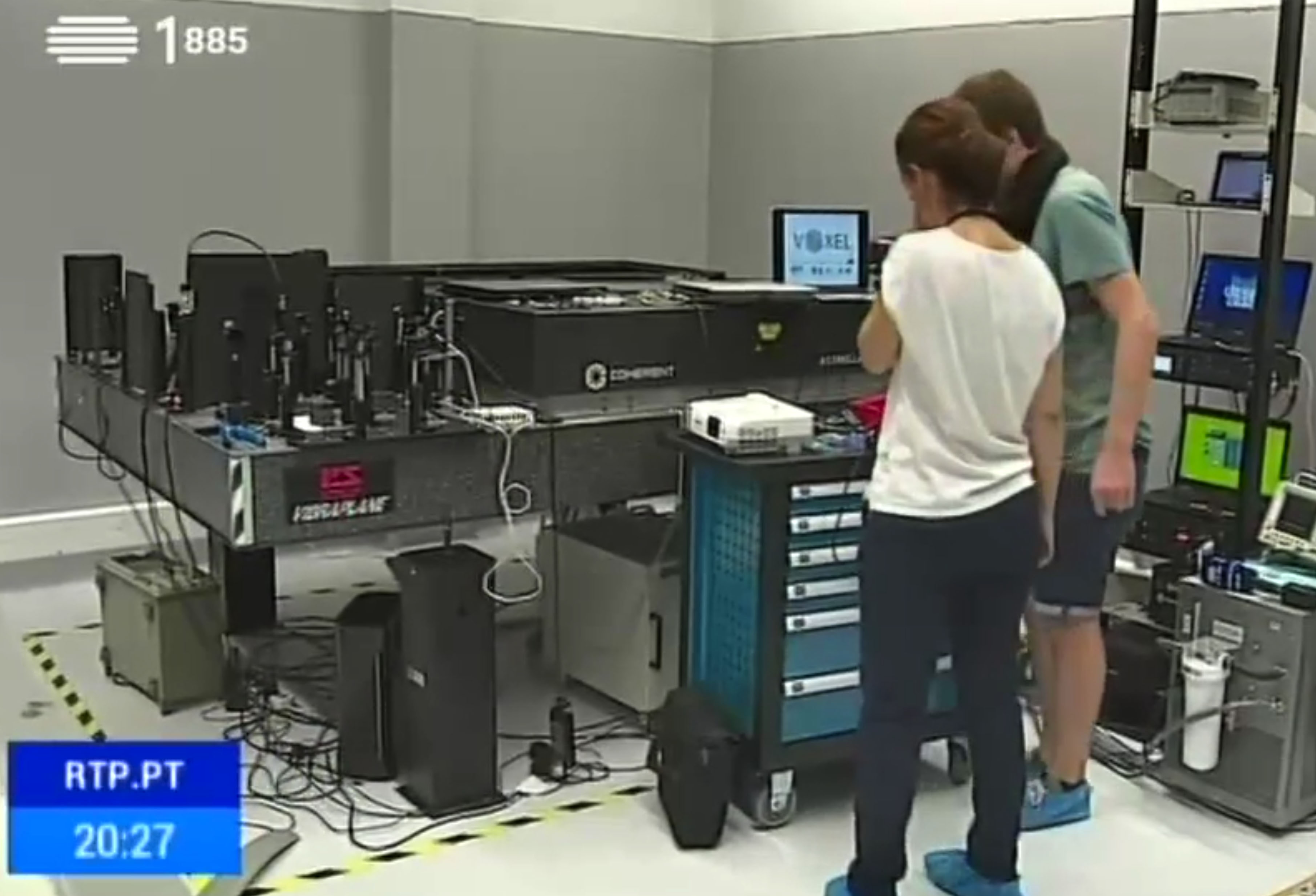 The VOXEL laboratory at Instituto Superior Técnico (IST) has been featured in the Portuguese prime time news of RTP1 on September 11, 2017. The news story (available here) covered the recent results of the application process to public universities in Portugal, where two courses of IST had the highest average admission grades at national level. Physics Engineering - one of the top-graded courses - students had the opportunity to visit the VOXEL laboratory at their first day at IST, as well as the new laser system supported by the European Commission under the FET program H2020 that will generate ultra-short and ultra-intense infrared light source that creates x-rays to test the VOXEL camera. They learned all about the research done at VOXEL from the European project coordinator Marta Fajardo and post-doctoral fellow Swen Künzel (in the picture).

Imagine Optic, one of the partners in the VOXEL project, is running for the Innovation Radar Prize under the category of Best early stage innovation, with the project Disruptive 3D X-Ray imaging systems. The Innovation Radar Prize is a competition launched by the European Commission and has the ultimate goal of identifying Europe's top future innovators and their innovations. We invite everyone to vote for Imagine Optic for this prize until 15 October 2017 here.

The new VOXEL metrology station is ON 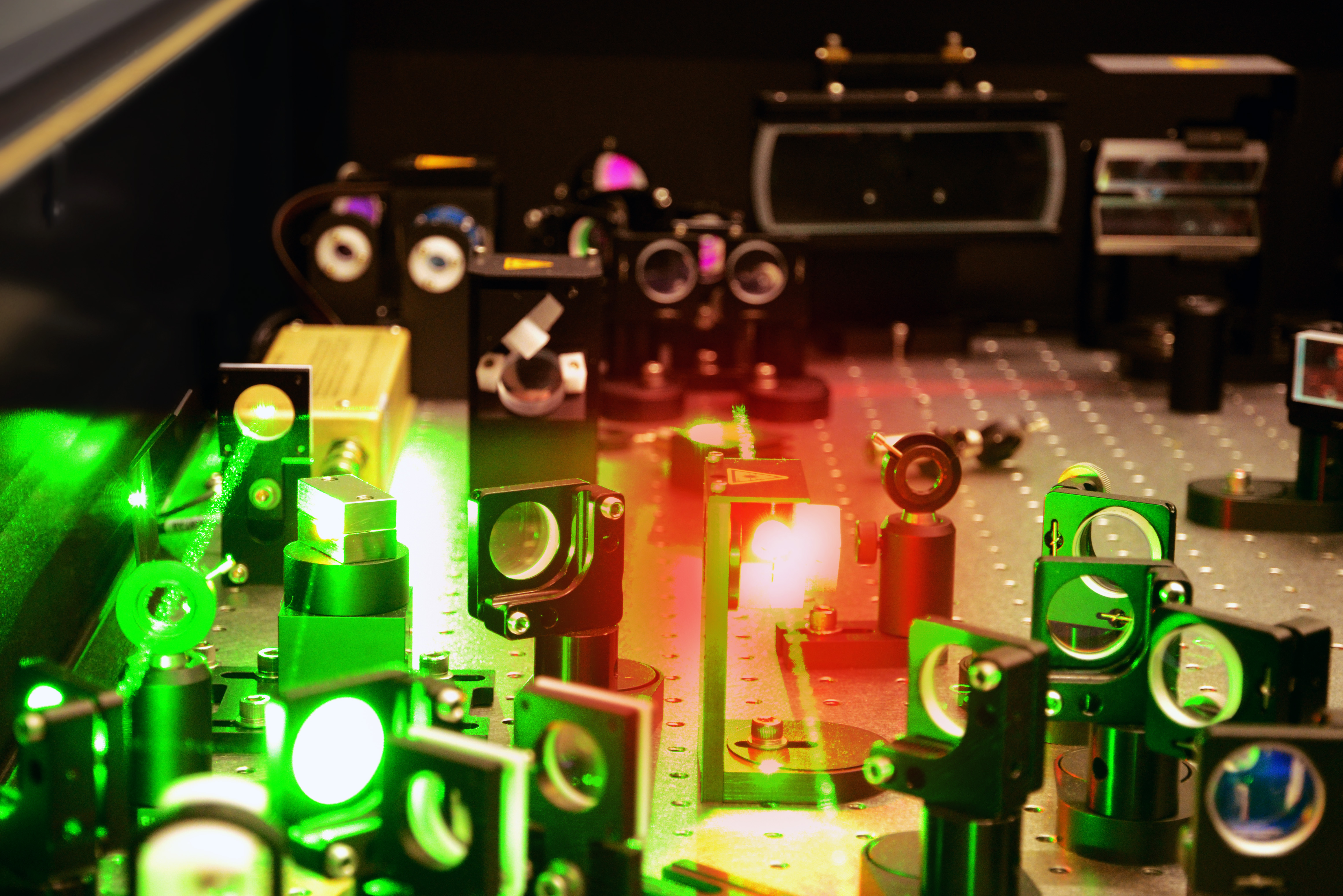 Around the beginning of 2017, IPFN received a new laser for the VOXEL program (Volumetric medical X-ray imaging at extremely low dose), thanks to the support of the European Commission under the program Horizon2020. The new laser will create an ultra-short and ultra-intense infrared light source, which focused on gases and solid targets like metals, creates x-rays to test the VOXEL camera. These tests will be crucial to calibrate the VOXEL camera prototype.

In a more technical basis, the GoLP team currently has a dual 800 nm laser providing 25 mJ - 40 fs - 10Hz and 7.5 mJ - 30 fs - 1kHz beams on a daily basis. With this configuration, the team hopes to build the X-ray beam lines, which will result toward nice experimental results.

As PI of the GoLP division of the VOXEL program, Marta Fajardo thanked all the involved in the effort, and welcomed all interested in booking a tour to the new facilities.

More than 1800 carbonized Greek and Latin papyri, discovered atÂ Herculaneum in 18th century, form the unique library survivedÂ from antiquity. This unique collection was charred during 79Â A.D. Vesuvius eruption, a circumstance which providentially preservedÂ them until now. The goal is to read the text hidden insideÂ unopened papyrus rolls without damaging them. We succeeded in reading the largest portion of Greek text everÂ detected inside Herculaneum-papyrus rolls using X-ray phase-contrastÂ tomography combined with a set of numerical algorithms forÂ  â€˜virtual-unrollingâ€™. We obtained precious information on theirÂ probable author, content, ink and on unexpected events historicallyÂ experienced by them.

The work has been published in Scientific Reports 6, articleÂ number:Â 27227 (2016). The results have had an eco on the media, namely in italian news broadcast and in CNN, which filmed the presentation of this work during the 28th International Congress of Papyrology, (1-6 august 2016 Barcelona, Spain) and is preparing a report to be aired in November 2016. 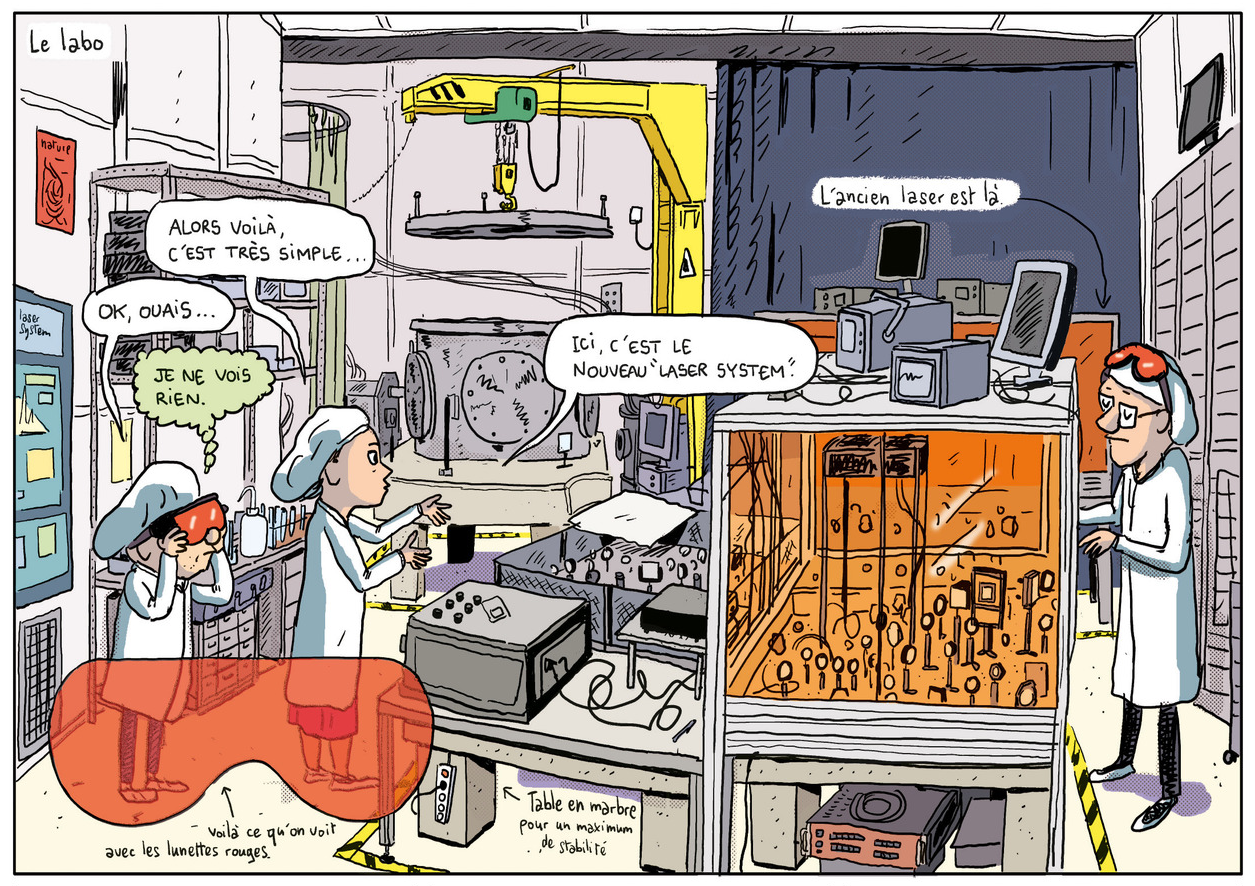 Marta Fajardo, coordinator of the VOXEL project, was recently featured in a special number of the Franco-Belgian comics magazine Spirou. In this number of Spirou, Marta Fajardo and some collaborators are seen in the Laser Laboratory L2I of the Institue of Plasmas and Nuclear Fusion (IPFN) @ Técnico Lisboa, Portugal.